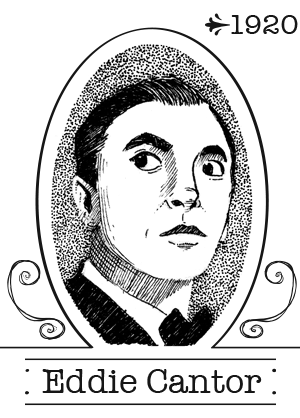 With an extensive career that spanned most of his life, Eddie Cantor was the pop worlds first multi-talented mega-performer that conquered stage, radio, the silver screen and television. Known as the “Apostle of Pep”, the energetic Cantor was know for his witty comedic eye-rolling song and dance routines. Born in New York city and raised by his grandmother after both of his parents died by 1902, Eddie Cantor began his career as a waiter and singing for tips at a Coney Island saloon in the early 1900's backed by Jimmy Durante on piano.  By 1907 he was performing on stage in Vaudeville. In the late teens and throughout the 20's Cantor was a top performer for Ziegfeld Follies and was performing with Will Rogers, Fanny Brice and W.C. Fields. Already he was singing hits such as “Whoopee” and “If You Knew Susie”. In 1923 he appeared in the first short sound films performing his song and dance and was the one of the era's most successful entertainers credited as a singer, songwriter, dancer, composer, actor and the highest paid comedian of the 1930's. His relentless drive and ambition kept him going through the decades, even after loosing everything in the stock market crash of 1929 and adapting to the changing mediums of radio, film and television. Through his extensive charity work Cantor helped create the March of Dimes in the 1950's  Cantor married Ida Tobias in 1914 and had five daughters together which Eddie would mention jokingly in his radio act. They were married until her death in 1962. Cantor died two years later at the age of 72.