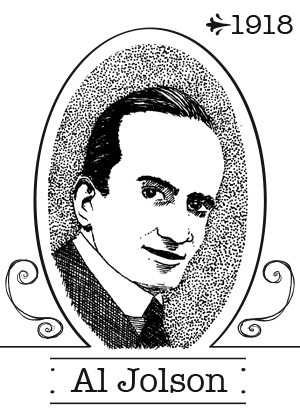 
Influencing the likes of Bing Crosby, Bob Dylan and David Bowie, one of the first great pop sensations, Al Jolson was dubbed the “The World's Greatest Entertainer”a fact hard to dispute. Born in a small Jewish village in Lithuania around 1886 (Jolson never officially stated his date of birth), his father moved the “Yoelson” family to America in 1894. Soon after, Al and his brother Harry sang for coins on the streets of Washington DC. By 1902 Joson was performing professionally with his energetic singing and on-stage charisma drawing the attention of many producers. By 1914 he was a star on Broadway earning over $2000 a week. With his enthusiasm for Blues and Jazz, Al Jolson is credited with introducing African-American music to white audiences. Though short films with sound had appeared as early as 1922 it was Al Jolson's 1927 feature film “The Jazz Singer” that introduced the first “talkie” to the world. In that film and throughout his career, Al Jolson performed in Black Face which was, at the time, an acceptable form of entertainment but has obvious connections to racism in America. He was, by no measure, racist and in fact, help introduce African-American music to white audiences and used his celebrity status and power as the era's greatest entertainer to advocated on behalf of black musicians and performers. Jolson had entertained millions around the globe and had been the first performer to entertain troops during WWII. His death in 1950 brought out over 20,000 mourners.