I'm going to cover how I created my sandbox campaign setting. None of these ideas may be groundbreaking but there may be a nugget or two in here that someone may find interesting and useful. I know that I've gained a ton from the various blogs and forums on the interwebz and hopefully this will be another piece in that mosaic.

Everyone will have their own methods and philosophies on campaign creation. No two campaigns are created alike and that's the way it should be. It should be a fun and creative process and not something tedious.

It's best to start by identifying your strengths and weaknesses and where you may want to challenge yourself as a GM. For me, I like to create maps. It's enjoyable and I don't consider it work at all. Populating that map with cities and encounters is another story. I can come up with dungeons and towns to populate my empires and kingdoms when I need to but, for me, that is sometimes too time intensive. I pull a lot of those elements from other resources and piece it all together.

A challenge for me is coming up with random encounters. I know that may sound like an easy task for some, but for whatever reason it always bogs me down. I'm always impressed with many of the encounter tables that I've found online or in supplements that others posted for download. So that will be something that I'll be focusing on; creating some interesting encounter tables. There are many great bloggers out there and forums that come up with great encounter lists or ideas. They're a great source for inspiration and I'll be using those as I go along and I'll be mixing and matching those as well.

I don't mind pulling as much material from other sources as possible and plugging them into my campaign. In fact, you might say that is what the original designers of the game intended; a flexible campaign creation system. Why do you think that the early adventures were called modules? So you can plug them into your campaign as needed. My methods involve a 'found art' collage concept. I create the parts that I enjoy then plug in the rest from other sources.

Now I'm not into total world building, detailing every major NPC, Kingdom, encounter, etc, I leave that up to game play. Your players will help define the campaign setting if you let them, and I say let them. Why do all the work yourself. In a sandbox campaign, broad-strokes are all you need. You can flesh things out between sessions or on the fly. Granted, that takes some flexibility on the part of the GM and I think that is a great skill for any GM to have and cultivate.

When I started my sandbox campaign concept the first thing that I worked on was the map. Other GameMasters may start in any number of ways, perhaps with some important NPCs or waring city-states and a bit of intrigue, or maybe it's just a megadungeon crawl. There is no single way to create a campaign. It's what ever you like or what ever strikes your fancy.

I began with some rough sketch layouts on 8 1/2 X 11 sheet of paper of the general regions and kingdoms and then refined it as I went along. As I'm working in this stage, a broad-stroke of the kingdoms and realms begins to emerge in my mind. Nothing detailed, just very general ideas of brief histories and perhaps some names. 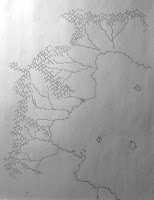 After I get a sketch that I'm pretty happy with I start to refine it. I usually start with a coast line and mountain ranges. I like my worlds to have a bit of logic to them, for example, rivers flow down from the mountains to the seas, settlements and trade routes will appear along these rivers and along the coasts, farming communities in the plains or hills. Coastlines should be very irregular. Again, create whatever world you want. The standard rules don't have to apply either, magic can change and bend the laws of physics however you wish your setting to be. Feel free to create anything you want.

My next post will talk about detailing and inking the map.